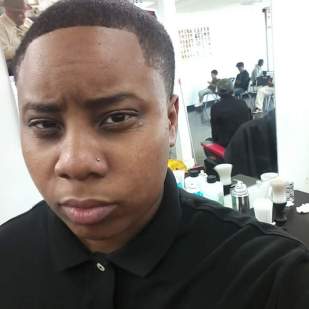 On July 13th 1994, I was born at Temple University in Philadelphia PA. I have very vague memories growing up but I can recall always wanting to do what guys do. I also picked out boy toys, hairstyles and clothes and I was always the “boy” when I played house. It was just something about a man’s role that I would never get enough of playing. My mother would always say “stop acting like a boy” or “your not a boy so stop that”. But to me what was “that”? No matter who picked my clothes out and no matter how girly they were I found a way to put an edge to them and my mom hated that. I grew up in a house with my mother but my father only seen me on the weekends. At only 6 years old I knew I was into women right away, by 13 I had completely taken on the tomboy role full fledged. Now of course I went through the boyfriend phase and it was the worse , I then begin to notice I was only living for everyone else instead of myself. I come from a religious background where certain things just aren’t natural in the eyes of others. But I say they were just lucky enough not to have been given these thoughts and feelings because I’m sure they wouldn’t know what to do with them. I’ve had my share of girlfriends and my mother was used to this stage in my life. At 21 I had my first child and only child , it was the best and worst experience of my life. I spent hours in labor having a natural birth with no medication, and hours later my child passed away. I felt lost in a limbo that you wouldn’t be able to understand. By 22 I had enough of relationships going sour because I wasn’t true to myself and I was just running from who I was. I never knew a such thing as a transgender, but spent several months researching, watching videos and reading everything I could about FTM and MTF people. It was like a whole new world no one really knew about and I was ready to take that step. Last year (2017) I made an appointment to speak with a therapist , sign my consent forms and take my first shot. I was excited it was almost like being born again! But the victory was short lived when I came out to family and friends and that was something. My mother had nothing to say and my father left my life back in 2014 for whatever reason. The only accepting one to my surprise was my grandmother (who I am very close to) even with being very religious my grandmother wanted me to live for me and nobody else. So I did just that.  I am now several months into HRT,  I am pre-op as well. April 5th, I have a consult for top surgery coming up so I am looking forward to that.